Do you ever wonder what you will do when you grow up? I chuckle as I write this because I feel like I am always morphing into a new version of me. As I change personally my business develops. The one thing that remains constant though is my firm belief in servant leadership.

The phrase “servant leadership” was coined in modern-day by Robert K. Greenleaf in The Servant as Leader, an essay that he first published in 1970. In contrasting the difference between leader-first and servant-first in that essay, Greenleaf says:

The difference manifests itself in the care taken by the servant-first to make sure that other people’s highest priority needs are being served. The best test, and difficult to administer, is: Do those served grow as persons? Do they, while being served, become healthier, wiser, freer, more autonomous, more likely themselves to become servants? And, what is the effect on the least privileged in society? Will they benefit or at least not be further deprived?

Servant leadership places the importance on being a steward of resources; striving to lead and serve others while still achieving our business goals. 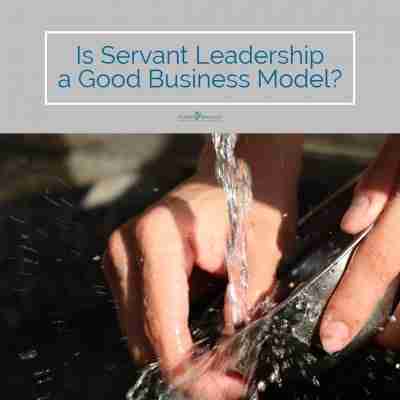 The year of 2000 was difficult for me personally. My husband, Tim, and I were expecting our 5th child. The pregnancy was unexpected and complicated from the beginning. At around 16 weeks I was told to stay off my feet. Not an easy task with four children, but I did what the doctor ordered. This lasted for several weeks and things were looking up. At around 19 weeks I went in for an ultrasound and was told that the baby had died. I was devastated. I questioned myself; “Did I do everything I should have? What could I have done better? Was this my fault?”.

Thankfully we had wonderful friends who loved and supported us. The wife had had a similar experience and her being a nurse helped me survive those next few weeks. This couple are my heroes! The man is highly educated and regarded in his field. I felt so unworthy of their love and care. This couple are world-travelers and still today keep up a travel schedule that would fell younger people. When they offered to take time out of their busy schedules to watch our children I was overwhelmed. The day that I had surgery I was so humbled by walking into my house and finding them in my kitchen, washing my dishes.

I learned an important lesson that day about servant leadership. Their caring and giving helped mold my ideas and shape my character. This memory stays fresh in my mind and I have been able to return their favor to me to others.

Establishing trust as a leader in vital. A servant leadership model is not about what everyone can do for me but rather what I can do for others.

I love asking someone what I can do to help them. They usually give me a blank stare like Yeah! Right!!!. I then go ahead and let them know I am serious.

Several years ago on Twitter a gentlemen was trying to crop some images for a project and he didn’t have the tools to get the job done. He was frustrated because he was on a deadline. I tweeted to him that I would be willing to help him out. How much? was the response I received. I let him know I was willing to do it free of charge (really only took a few minutes of my time) but he was so impressed. Within a few minutes he had a solution to a problem that was being such a source of frustration an hour before.

This small task took moments of my day but I received a note several weeks later from the gentleman thanking me. What a joy!

Are you a servant leader? I would love to hear about it. Please comment below!